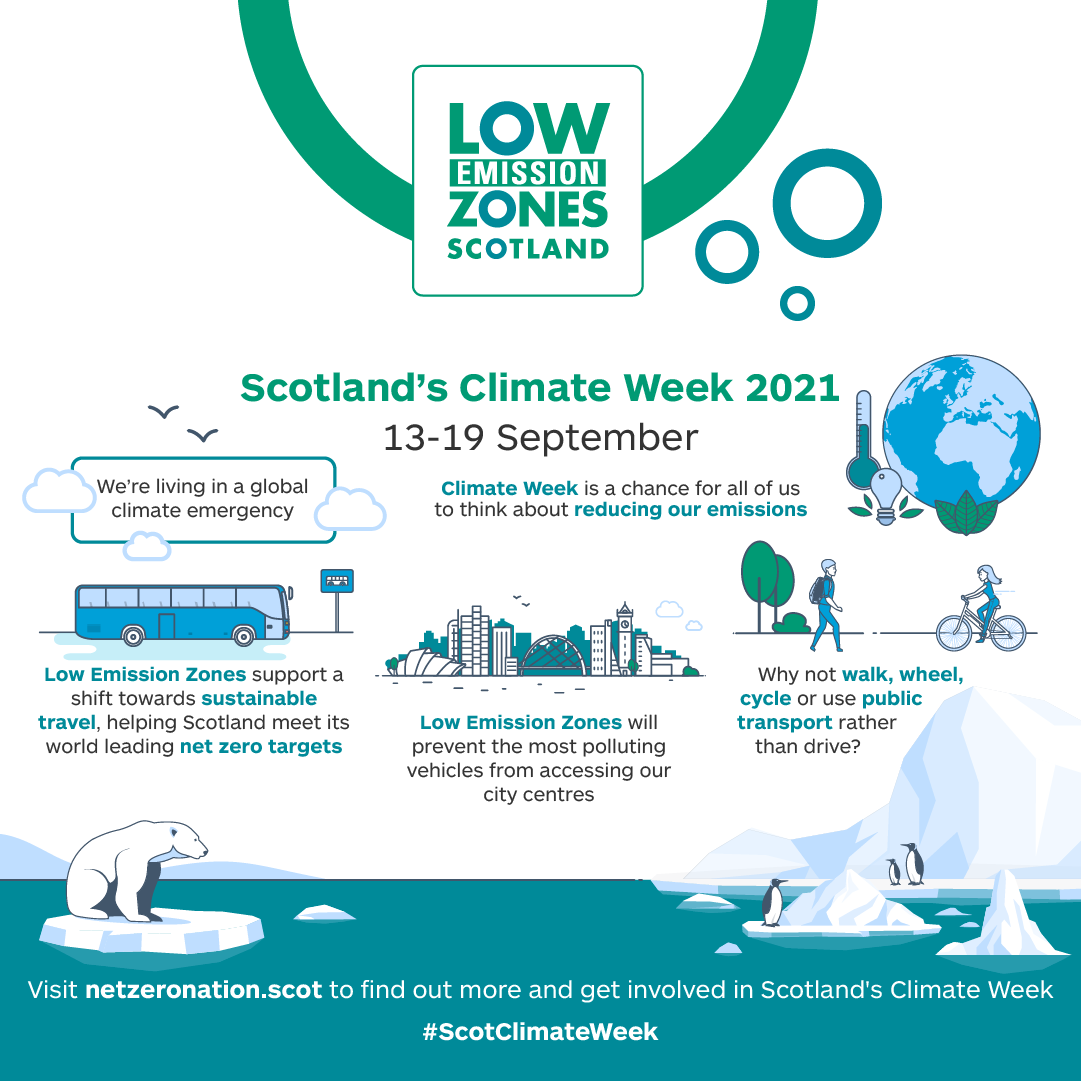 We are currently in a climate emergency and taking action to reduce global greenhouse gas emissions has never been more important.

With six weeks until the world’s biggest international summit on climate change, the 26th UN Climate Change Conference of the Parties (COP26) held in Glasgow, Climate Week is a chance for us all to think about how we can reduce emissions.

By raising awareness of the inspirational and important climate action that’s already underway across Scotland, Climate Week is a great opportunity to encourage people, businesses and organisations to take more action before, during and after COP26 to demonstrate Scotland’s collective effort to protect the planet we love.

The Scottish Government has set an ambitious target to reduce greenhouse gas emissions to net zero by 2045. This means that the amount of greenhouse gas emissions we put into the atmosphere will balance with the amount we’re able to remove. Interim targets of achieving a 75% reduction in emissions by 2030 and 90% by 2040 have also been set, making Scotland one of the first countries to set these bold targets.

We can achieve net zero by cutting our emissions to a minimum in a variety of ways and by acts such as planting trees or using carbon capture technology.

Reaching net zero by 2045 is a challenging target, and so Scotland needs everyone to work together towards the common goal and make lasting changes to the way we live and work – Government, businesses and individuals.

Low Emission Zones (LEZs) are an important way of raising awareness and providing an incentive to change some lifestyle habits around the way we travel – encouraging more sustainable and active travel will help Scotland meet its world leading net zero targets.

LEZs in Aberdeen, Dundee, Edinburgh and Glasgow are expected to be introduced by the end of May 2022 and will prevent the most polluting vehicles from accessing our city centres.

Changing to an ultra-low emission vehicle is another way to reduce your carbon footprint. Low Emission Zones encourage the use of electric vehicles, plug-in hybrids and electric bikes instead of much older petrol and diesel cars. The Scottish Government is phasing out the need for new petrol and diesel cars by 2030. There is various funding available to make a switch towards electric vehicles more affordable.

It is hoped the LEZs will encourage people to leave their cars at home and consider walking, wheeling or cycling instead. With upgraded public transport in each of the four cities, catching a bus or train is another great alternative to driving. Using public transport can also help to reduce traffic on the roads, making journeys faster. One full double decker bus is the equivalent of removing 75 single occupancy cars from Scotland’s roads. This week, to help support Scotland’s Climate Week, why not see what public transport options are available around you and leave the car at home, whether you’re commuting to work, visiting people or having a day out?

Whether you’re catching public transport, going for a walk or taking your bike instead, you will lower your greenhouse gas emissions and contribute to Scotland becoming a net zero nation.

Head to netzeronation.scot for advice and information on a variety of other ways you can show your support for Scotland’s Climate Week and make positive changes for the future. More information on sustainable transport options and travelling in Scotland’s LEZs can be found here.