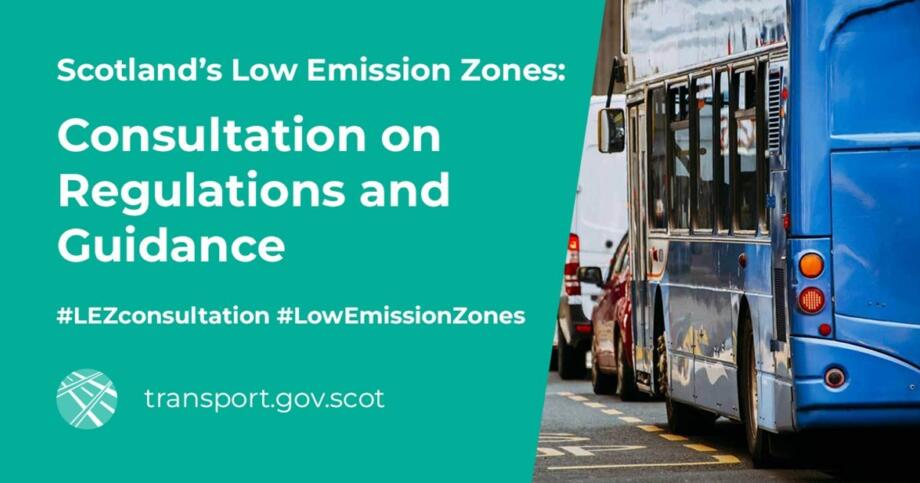 A new consultation on regulations and guidance for Scotland’s Low Emission Zones (LEZs) has now been published.

This second consultation on Scotland’s LEZs seeks views on enforcement, penalties, national exemptions and more as the Scottish Government seeks to ensure consistency in how LEZs operate across Glasgow, Edinburgh, Dundee and Aberdeen by the end of 2020.

The Scottish Government’s vision is for Scotland to have the best air quality in Europe in conjunction with Scotland’s new legally-binding target to become a net-zero society by 2045. LEZs contribute directly to the health, environmental and transport agendas, and the ambition of the proposals outlined within this consultation will mean significant changes for how we move around our biggest cities.

Welcoming the opportunity for the public to have their say, Cabinet Secretary for Transport, Infrastructure and Connectivity Michael Matheson said:

“Since we first announced the ambition to deliver Low Emissions Zones in our four biggest cities by the end of 2020 – there has been considerable interest in their scope, national exemptions and what this means for communities across Scotland.

“We know from previous consultations that there is broad support for the potential of Low Emission Zones to protect public health and improve air quality – but there are a variety of views on our proposals for how LEZs will work consistently across Scotland, which I recognise is vitally important for their success.

“Through the Transport (Scotland) Act 2019 we have created the legal framework to create nationally consistent LEZs. We are now consulting on regulations for substantive issues such as emission standards, exemptions, the enforcement regime and the setting of penalty charges.

“To do so in a just and equitable manner, it is critical that we design these regulations in a collaborative way with the public, private and third sector – and I would encourage anyone with an interest to respond to this consultation on these very ambitious proposals for Scotland’s Low Emission Zones.”

The consultation on Scotland’s Low Emission Zones: Regulations and Guidance will be open for 10 weeks.