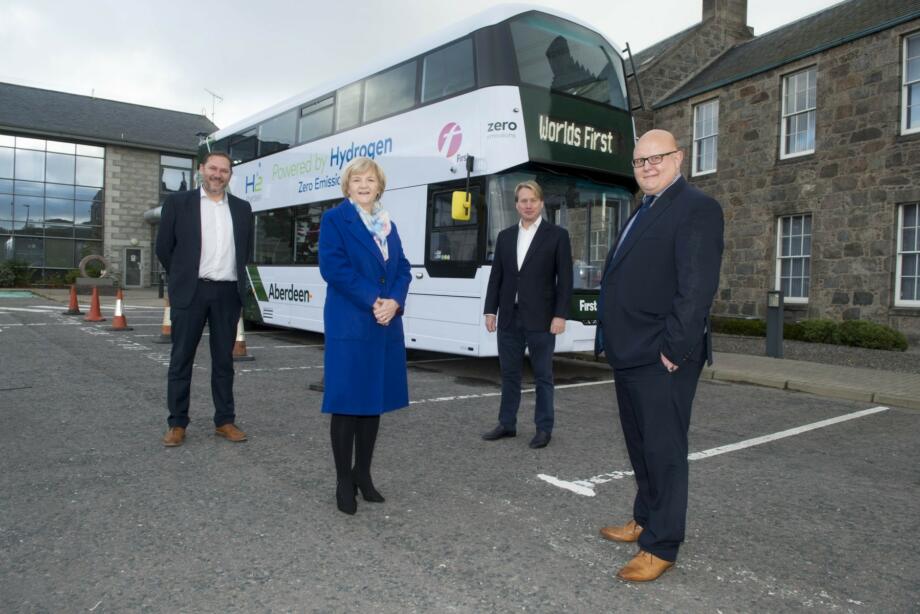 The world’s first hydrogen-powered double decker bus was revealed today in Aberdeen which showcases the city as a trailblazer in hydrogen technologies.

The arrival of the first of the zero emission buses underlines the city’s role as the energy capital of Europe and shows its commitment to the transition of green energy from oil and gas as part of the Net Zero Vision.

The hydrogen double deckers will be spotted around the city for several weeks during a period of final testing along with training for drivers, with the buses expected to be in service next month.

The buses are as efficient as electric equivalents, with refuelling taking less than 10 minutes and offering a greater range. Water is the only emission from the vehicles which reduces carbon emissions and the new buses continues to contribute to the city’s commitment to tackling air pollution.

The UK’s first hydrogen production and bus refuelling station was opened in Aberdeen in 2015, as part of a £19million green transport demonstration project. The Aberdeen City Council-led project tested the economic and environmental benefits of hydrogen transport technologies and aims to drive the development of hydrogen technologies.

Aberdeen City Council Co-Leader Councillor Jenny Laing said: “We are very proud to bring the world’s first hydrogen-powered double-decker buses to Aberdeen as it shows the city continues to be at the forefront of developing green technologies.”

“The roll out of the new double-decker buses will help to cement Aberdeen’s position as an entrepreneurial and technological leader as the new buses come with even more advanced technology which pushes established hydrogen boundaries and greatly assists us in tackling air pollution in the city.”

“We look forward to seeing the new hydrogen double-deckers being tested around the streets of Aberdeen over the next few weeks before they come into service.”

“By leveraging our unique assets and capabilities, we will help lead the world on the rapid shift to a net zero future and support the global energy transition as a climate positive city.

“We are responding, as a city and place, to the environmental imperative and also our role as a world leader in the energy sector as an economic driver for the city, region, Scotland and the UK.”

The buses have been manufactured by a UK-based company – Wrightbus based in Northern Ireland - and will complement the existing fleet that the city already boasts including a range of hydrogen and electric vans, road sweepers, and cars through a car share scheme.

“And these buses represent much more than Aberdeen striving to reach a clean air, zero-carbon future. They represent the start of what could be a world-leading hydrogen economy here in Scotland which will bring with it multi-million pound investments and tens of thousands of jobs.

“Not only do our buses hold the title of being the world's first zero-emission hydrogen fuel-cell double deckers, they emit only water vapour.

“We hope that more councils across the UK follow Aberdeen City Council’s lead.”

First Aberdeen, part of the multinational company First Group which originated in the city, is to run the 15 buses along one of its most popular service routes and the new vehicles will further underline the city’s role as a pioneer in hydrogen.

David Phillips, Operations Director for First Aberdeen, said: “We are delighted to be operating these state-of-the-art double decker hydrogen buses in partnership with Aberdeen City Council and we are thrilled to share a sneak peak of them with the public today.

“We look forward to rolling them out to the people of Aberdeen later this month and it is exciting to play a part in the latest leg of the city’s hydrogen journey. First Aberdeen are committed to working with local stakeholders to accelerate our driver for a zero emission fleet across our entire network by 2035 and we are excited to see the impact these buses will have.”

The vehicles will be operated by First will be mainly on the Service 19 (Peterculter to Tillydrone) along with other services and is part funded by the European Union’s JIVE project, which aims to aid commercialisation of hydrogen buses through joint procurement between cities. Cities that will follow Aberdeen’s footsteps include London and Birmingham, with Dundee and Brighton and Hove being lead partners in JIVE2.

The new £8.3million project has been funded by Aberdeen City Council, the Scottish Government, and the European Union (FCH JU), with an investment of about £500,000 per vehicle.

Scotland’s Energy Minister, Paul Wheelhouse, said: “I warmly welcome the deployment of the very latest generation of zero emission hydrogen buses in the city – building on Aberdeen’s already-impressive record of achievements as a pioneer in the use of hydrogen transport solutions. Our funding contribution of £3 million towards this new fleet is evidence of our commitment to decarbonising transport, as a key element of Scotland’s journey to net-zero carbon, with potential economic benefits for the North East and right across the remainder of Scotland.”